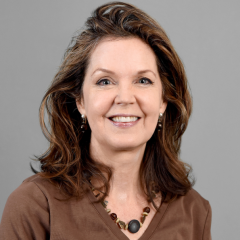 Tracy Fessenden is the Steve and Margaret Forster Professor in the School of Historical, Philosophical, and Religious Studies and Director of Strategic Initiatives in the Center for the Study of Religion and Conflict.  She holds degrees in religious studies from the University of Virginia and in English from Yale. Her work focuses on religion and American literature and the arts; gender, race, and sexuality in American religious history; and the relationship between religion and the secular in American law, culture, and public life. She is the author of  Religion Around Billie Holiday (Penn State UP, 2018) and Culture and Redemption: Religion, the Secular, and American Literature (Princeton UP, 2007; 2013); co-editor of Religion, the Secular, and the Politics of Sexual Difference (Columbia UP, 2013) and The Puritan Origins of American Sex: Religion, Sexuality, and National Identity in American Literature (Routledge, 2001); co-editor of the North American Religions series at New York University Press, the Religion Around series at Penn State University Press, and the journal Religion and American Culture for Cambridge University Press. Her articles and essays have appeared in journals including American Literary History, the Journal of the American Academy of Religion, Religion & Politics, Early American Literature, New Literary History, the Journal of Feminist Studies in Religion, Church History, Religion and Literature, the Journal of Women's History, Religion, U.S. Catholic Historian, Signs, and in many edited collections and anthologies. Professor Fessenden has been a principal or co-principal investigator on numerous research projects, including Recovering Truth: Religion, Journalism, and Democracy in a Post-Truth Era and Religion and International Affairs: Through the Prism of Rights and Gender, both supported by the Luce Foundation; Apocalyptic Narratives and Climate Change: Religion, Journalism, and the Challenge of Public Engagement, supported by Luce and the American Council of Learned Societies; and Public Religion, the Secular, and Democracy and Difficult Dialogues: Teaching and Talking about Religion in Public, both supported by the Ford Foundation.