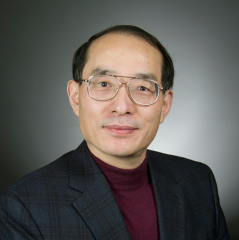 Yong-Hang Zhang is a Professor of Electrical Engineering and the founding director of the Center for Photonics Innovation at ASU. His primary research is on the growth, fabrication and characterization of novel optoelectronic materials and devices with focus on narrow-gap semiconductors, IR detectors, and solar cells. His recent work focuses on type-II superlattice and IR detectors and heterovalent semiconductor integration (such as II-VI, IV-VI, IV-IV and III-V) for lsaer, detector and solar cells applications. He did his thesis research at the Max Planck Institute for Solid States Research and received his doctoral degree in physics from the University of Stuttgart in 1991. He then worked as an Assistant Research Engineer at UCSB before he joined HRL in 1993. In 1996, he was appointed as an Associate Professor at ASU and became a full professor in 2000. He served as the Associate Dean for Research at the Ira Fulton Schools of Engineering and the Director of ASU Nanofab. He edited 4 books, published 4 book chapters and more than 310 peer-reviewed papers, 18 issued and pending US patents, presented close to 430 invited and contributed talks, and graduated 28 PhD students and supervised over 40 postdocs and visiting scholars. He is a fellow of IEEE and OSA, and the chair of both Advisory Committees for the International Conference on Molecular Beam Epitaxy (MBE) and the International North America MBE Conference.