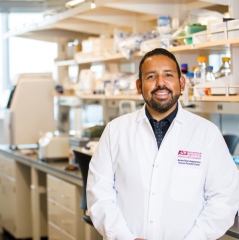 Ramon Velazquez is an assistant professor in the School of Life Sciences and with the Neurodegenerative Disease Research Center at the Biodesign Institute - Arizona State University. His research interests include identifying novel therapeutic targets for neurodegenerative disorders such as Alzheimer’s disease (AD) and Down Syndrome (DS). In particular, he focuses on early molecular events that trigger the progression of these diseases. He is also interested in drug discovery and dietary supplementation of B-like vitamins as a way to prevent disease progression. Velazquez received his doctoral degree at Cornell University and worked in the laboratory of Dr. Barbara Strupp. Velazquez was funded by the National Science Foundation (NSF) Pre-Doctoral fellowship as a graduate student and completed his postdoctoral training in molecular biology and neuroscience at ASU, where he was independently funded by the Alzheimer’s Association and via a NSF postdoctoral fellowship. Velazquez’s ultimate goal is to progress science while consecutively helping those who suffer from insidious neurodegenerative diseases.

As a neuroscientist, I have been mainly interested in deciphering the early molecular events that contribute to the pathogenesis of various neurodevelopmental and neurodegenerative diseases. In particular, I am interested in identifying new therapeutic targets for discovery of drugs that can ameliorate disease progression.  Our lab uses a combination of post mortem human brain tissue in addition to various lines of animal models of Down Syndrome (DS) and Alzheimer's Disease (AD) to test our hypotheses. I strongly believe that in order to progress outcomes within research, collaborations are key. Sharing knowledge through publications, mentorship, teaching and public seminars have been key to furthering my scientific career. My ultimate goal is to make a large impact by both progressing science and consecutively helping those who suffer from insidious diseases.

Given that the elderly is the fastest growing population in our society and that age is the single most important risk factor for Alzheimer’s disease (AD), there is an urgent need to understand the mechanisms contributing to AD pathology. Doing so, we will be able to develop strategies by which we can prevent the incidence of AD, as well as help those that are currently in advanced stages of this disease. One of the most fruitful approaches for studying neurodegenerative diseases stems from utilizing a multidisciplinary strategy. My graduate and early postdoctoral studies have shaped me into a well-rounded neuroscientist with this type of multidisciplinary approach, as I received extensive training in behavioral neuroscience, animal models of disease, neurobiology and molecular neuroscience. This allows us to ask questions at multiple levels of analysis.

Pim1, a protein kinase from the proto-oncogene family, emerged in research as it is elevated in various cancers. Within the brain, Pim1 is expressed exclusively in the cortex and hippocampus, two brain regions that are highly vulnerable to AD pathology. We identified Pim1 as being dysregulated in post-mortem brain tissue of patients with in early and late stages of AD compared to age-matched controls. Physiologically, Pim1 phosphorylates and regulates the activity of the proline-rich AKT substrate 40 kDa (PRAS40), which is involved in modulating protein degradation. Pim1 also plays key functions in long-term potentiation and synaptic plasticity, and increased Pim1 activity is linked to seizures and neuronal death. Pim1 is regulated by JAK/STAT, a pathway activated by inflammation. Our recent data illustrates that Pim1 is elevated in CA1 hippocampal neurons of AD patients and our published work shows that pharmacological inhibition of Pim1 rescues AD pathology in 3xTg-AD mice. Notably, 3xTg-AD mice develop amyloid-β plaques and pathological tau, which are the two hallmark pathologies in AD. The current goals of this project is to determine how modulating neuronal Pim1 activity interferes with AD pathology and to dissect the upstream mechanisms linked to Pim1 upregulation. We hypothesize that activation of the JAK/STAT pathway by inflammatory cytokines increases Pim1 activity, which in turn facilitates the development of AD pathology.

Growing evidence indicates that Alzheimer's disease (AD) starts decades before its clinical manifestation and that early clinical interventions are needed to effectively mitigate the progression of AD. However, the initial triggers in the cascade of pathological events leading to AD remain elusive. Virtually 100% of people with Down syndrome (DS) will show brain accumulation of amyloid-β (Aβ) and tau in their fifth decade of life. Despite these data, little is known about the processes linking DS to AD. We postulate that dissecting the molecular mechanisms driving AD pathology in DS patients will lead to a better understanding of the etiology of AD. Previous work indicates that the mammalian target of rapamycin (mTOR) is hyperactive in human and animal models of DS and AD. Further, we and others have shown that hyperactive mTOR signaling facilitates the accumulation of Aβ and tau. Together, these novel and exciting findings may answer a fundamental unresolved question: which event triggers the development of AD neuropathology in DS. The answer to this question will unveil mechanistic changes linked to the etiology of AD. The overall hypothesis of this project is that dysfunctional tuberous sclerosis complex 2 (TSC2), which is a regulator of mTOR, increases it’s activity in DS, which in turn contributes to the development of AD-like neurodegeneration. The results from this work will lead to a better understanding of the mechanism leading to neurodegeneration in DS and AD and will identify new therapeutic targets for these two disorders.

Techniques performed in our laboratory

AAS/Science Program for Excellence in Science

1. Zoe I. Lusher – Mentored at Cornell University and was co-authored on one of my publications. She received her B.S. in 2012, an M.D. in 2018 and is now in her medical residency.

2. An L. Tran - Mentored at Arizona State University as part of the Barrett’s Honor’s college program. She was co- authored on three of my publications. She is now teaching abroad.

3. Lukith Surendra - Mentored at Arizona State University as part of the Barrett’s Honor’s college program. He will apply for Medical School in Fall of 2019.

4. Marc Mifflin - Mentored at Arizona State University as part of the Barrett’s Honor’s college program. I am a member of the students’ thesis committee (2018-present).