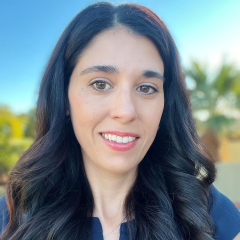 Allison Curran joined ASU in January of 2008. She has previously worked at Towson University, in Maryland, which is where she received her Bachelor's degree in the area of Mass Communications and Public Relations. In 2010 she received her M.Ed. in Higher and Post Secondary Education from Arizona State University.

Allison has been with the SCAI Advising Center since 2008, first as a Student Support Specialist, then moved up from Advisor to advising leadership. She now serves as the Associate Director of Academic Services for SCAI. Allison is responsble for the strategic planning and oversight of all graduate and undergraduate advising for the following programs Computer Science, Computer Systems Engineering, Computer Engineering, Data Science Analytics and Engineering, Informatics, Industrial Engineering, Engineering Management, Robotics and Autonomous Systems- Artificial Intelligence concentration, and Software Engineering. Our school services roughly 10,000 students at the Tempe, Polytechnic and Online campuses.