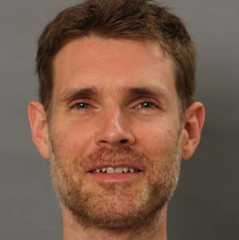 Rochus Boerner received a master of natural science (an interdisciplinary degree with major mathematics and minor computer science) from Arizona State University in 1999, and a doctorate in mathematics from from Arizona State University in 2004. His doctoral research was in wavelets and harmonic analysis, the branch of mathematics that studies the frequency content of signals. He worked as a software engineer in the development of professional 3D design software from 2004 to 2007. Since 2007, he has been teaching mathematics at ASU and has taught most first and second-year mathematics courses. Lately, he has mostly been teaching the Calculus sequences, Discrete Math and Applied Linear Algebra. He developed and taught the mathematics portion of the engineering Jump Start and BioBridge programs, and MAT 275 and MAT 243 online. He is the 2016 recipient of the School's Award for Outstanding Instruction and Service.