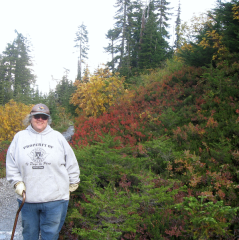 Ann Hibner Koblitz, professor of women and gender studies in the School of Social Transformation, has taught at ASU since 1998. Her first book was the biography of a Russian woman mathematician, feminist and writer. Her second book examined the lives of the first group of Russian women to receive their doctorates in the sciences and medicine. Her most recent book, "Sex and Herbs and Birth Control: Women and Fertility Regulation through the Ages" (Kovalevskaia Fund, 2014) received the 2015 Transdisciplinary Humanities Book Award from the Institute for Humanties Research at ASU and is a cross-cultural examination of fertility control methods, meanings of pregnancy/abortion, demographers' narratives about reproduction, and degradation of contraceptive knowledge. She also directs a small non-profit foundation, the Kovalevskaia Fund, for the encouragement of women in science, technology and medicine in Asia, Africa and Latin America, and she hosts the blog, Sex, Abortion, and Contraception.

Although Professor Hibner Koblitz's research interests have changed considerably since she received her doctorate in Russian intellectual history from Boston University in 1983, they still generally revolve around the relationships of gender with science, technology (broadly defined) and medicine. Her first two books, "A Convergence of Lives. Sofia Kovalevskaia: Scientist, Writer, Revolutionary and Science," and "Women and Revolution in Russia," examined the lives of 19th-century Russian women scientists and mathematicians and explored the significance of their stories for feminist gender and science theory. She has also written several dozen research articles on Russian women in science, gender and science theory, gender and archaeology, and comparative aspects of women/gender in science, technology and medicine (with special emphasis on the situations of women in Asia, Africa and Latin America).

She has consulted for UNIFEM, the Vietnam Women's Museum, and the Gender Research Institute of Essen University. She has been an Arizona Humanities Council speaker, and has served on national committees of the History of Science Society, the American Association for the Advancement of Science, the Association for Women in Slavic Studies, the American Mathematical Society, and other professional organizations.

Teaching interests: feminist theory, gender and science/technology/medicine, gender and development, and women's medicine. Her global feminist theory course explores the interactions/tensions of transnational feminist theory with postcolonial theory, critical race theory, etc. Her graduate courses examine feminist epistemologies, ecofeminism, technologies of gender, and postcolonial critiques in the context of science and technology studies; and case studies in biopolitics and its relationships to market and state actors. She is also graduate faculty in History, and she is on the executive committee of the doctoral program in Human and Social Dimensions of Science and Technology.

NOTE:  These are selected publications since 2010.  For a full list of publications, see my curriculum vitae.

NOTE: These are selected presentations since 2010.  For a complete list, see my curriculum vitae.

Recipient of the "President's Friendship Medal" of the Government of Vietnam, 1995, 2010