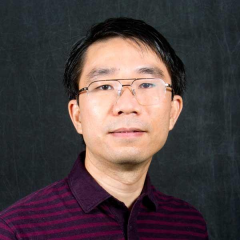 Xuesong Zhou joined the School of Sustainable Engineering and the Built Environment at Arizona State University in 2013. Previously, he was an associate professor at University of Utah.

Zhou is the co-chair of the IEEE ITS Society Technical Committee on Traffic and Travel Management, co-vice chair for Institute for Operations Research and the Management Sciences, Railway Applications Section (RAS). He also serves as the chair for the Network Equilibrium Modeling Subcommittee in TRB Committee on Transportation Network Modeling (ADB30). He is also the co-inventor of Key2SafeDriving technologies, which has been reported by more than 300 media outlets including New York Times, Wall Street Journal and National Public Radio.