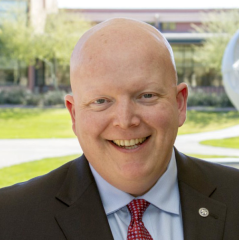 Prior to joining Thunderbird’s Executive Team as Chief Engagement Officer, Patrick worked on a number of special projects for the President’s Office at Arizona State University based in ASU’s Washington Center, including the Transatlantic Higher Education Partnership and the Center for Gender Equity in Science and Technology.  Patrick returned to the US in 2014, after 13 years living and working in Ireland as Chief Executive Officer of the Dublin City University Educational Trust.  In this role, Patrick developed the university’s philanthropic foundation and alumni office.  During his tenure, he led the implementation of an alumni engagement program, as well as a donor recognition society and legacy initiative, a comprehensive endowment strategy, and the launch of the university’s first capital campaign.

Patrick joined the Trust in September 2001 as Special Adviser to the President.  In this capacity, his primary responsibilities were in building international partnerships and strategic alliances with other institutions of higher education, multinational corporations, and philanthropic organizations interested in innovative practices in higher education. During his tenure in Ireland, Patrick hosted two visits to Dublin City University by Hillary Rodham Clinton, as Senator from New York, and as US Secretary of State.

Prior to joining Dublin City University, Patrick served as an appointee in the administration of President William Jefferson Clinton, serving as White House Liaison and Trip Director for United States Secretary of Education, Richard Riley.  As a member of the Secretary’s senior staff, Patrick worked on a variety of educational issues and policies.  He helped recruit and manage hundreds of Clinton Administration appointees at the US Department of Education and oversaw appointments to over thirty federal boards and commissions.  In addition, Patrick was responsible for Secretary Riley’s visits to schools and campuses across America and around the world, promoting excellence in education and building community partnerships.  Patrick earned his Bachelor’s Degree from Washington and Lee University, where he was awarded the Algernon Sydney Sullivan Medal, bestowed by faculty vote on the graduating senior who "excels in high ideals of living, in spiritual qualities, and in generous and disinterested service to others."