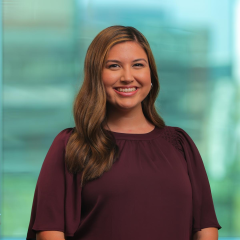 Breanna Carpenter is an Assistant Director in the ASU Public Enterprise. She is passionate about serving the public and joins the ASU Public Enterprise team, having spent her career conducting research around former foster youth and their transition to higher education institutions. Since 2015, Breanna has served the university – most recently as one of three ASU Social Innovation Fellows, sponsored by the Office of Applied Innovation.

Before that time, she worked at Watts College at ASU's downtown campus for five years, managing projects, strategic programs, and events to achieve college objectives. Breanna played a key role as part of a core group of ASU leaders who worked with the Arizona Department of Health Services surrounding ASU's response during the SARS-CoV-2 pandemic to make public saliva testing and vaccinations available and accessible to the general public within the state of Arizona, including tribal lands. She designed, developed, and scaled operations for 100's testing sites throughout the state, especially for underserved communities, vulnerable populations, and the general public.

She then led all public testing and vaccination sites for ASU and Arizona and launched over 80 public testing sites and four mass vaccination sites statewide. Breanna designed, implemented, oversaw, and led operations, logistics, and personnel of over 2,500 people for all four mass vaccination sites, including the first of its kind, 24-hour vaccination site at State Farm Stadium, home of the Arizona Cardinals football team, which administered 12,0000 vaccine doses a day, deemed "Best in the United States" by the Center for Disease Control and virtually visited by the President of the United States, Joe Biden, and United States Vice President, Kamala Harris, on February 8, 2021. She and her team's work and effort resulted in over 1 million COVID tests and 1.4 million vaccination doses administered to Arizonans.

Breanna is a first-generation college student and holds a Bachelor's degree in Social Work, a Master's degree in Social Work, and a Master's degree in Public Administration, all from ASU. Breanna is a Faculty Associate at the Watts College of Public Service and teaches leadership courses annually. In a part-time capacity, Breanna supports families and children in her role as a social worker at Phoenix Children's Hospital. Having personal experience in the foster care system in Arizona, Breanna is a passionate advocate for Child Welfare practice and for keeping children, individuals, and families safe and healthy.