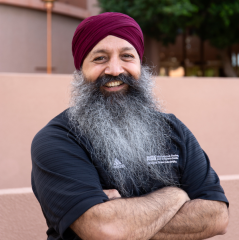 Holly Singh is the Assistant Vice President in the Academic Enterprise Enrollment team, and oversees International Students and Scholars Center (ISSC) at the Arizona State University. He engages in many aspects of international student/scholar experience at ASU, compliance with the federal government being one of them, and has created collaborative programming to support the unique needs of international students and visiting scholars. Holly also travels internationally and meets with prospective and admitted students, along with their parents, with conversations around higher education opportunities in the U.S. in general and ASU in particular.  Additionally, Holly works with many of ASU's international faculty and individual departments to help process H-1b worker visa and permanent residency requests.

Holly was responsible in expanding on Valparaiso University’s strategic vision of internationalization by pioneering a summer global leadership program for high school students and leading as a co-PI for multiple 7-month Teacher Training Program cohorts for teachers from Ecuador. Holly also created a short-term study abroad program for students and faculty to India. Holly was awarded the Martin Luther King Jr award by Valparaiso University in 2013 for his role in promoting diversity and inclusion.

Holly is married and has four kids. He came to the United States as an international student in 1991 and received his bachelor's and master's degrees from Valparaiso University. He grew up in New Delhi, India.