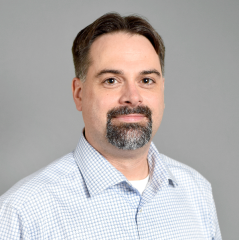 Eric Nystrom is an Associate Professor of History for the College of Integrative Sciences and Arts. He brings experience as a historian of science and technology specifically focused on the areas of public history and mining history. Over the last decade, Nystrom's research has also ventured into digital and legal history, including the application of data analysis to interpret historical language used in U.S. courts.

Nystrom has served as President of the Mining History Association (2021-22) and on the Board of Trustees for the National Susan B. Anthony Museum & House (2014-20). At the Susan B. Anthony House, Nystrom served on the steering committee which developed the museum's new strategic plan and participated in creating fundraising initiatives to secure the long-term strength and expansion of the museum.

Nystrom's research focuses on the history of mining and the evolution of mining engineering throughout the 19th and 20th century. His book Seeing Underground: Maps, Models, and Mining Engineering in America investigated the visual culture of mining, and demonstrated how visual tools helped form the mining engineering profession in the late 19th and early 20th century. Seeing Underground won the Clark Spence Award from the Mining History Association for the best book on mining history. He is founder and editor of the scholarly book series Mining and Society with the University of Nevada Press where he oversees the selection and review of books for the series, which has so far resulted in four scholarly books for the press.

Nystrom's next book projects include an examination of how mining was portrayed to the public in museums (University of Massachusetts Press) and a co-authored book which uses digital history methods to examine the social history of deafness and deaf culture in the 19th century. As a native Nevadan with a keen interest in historical moments that shaped the state's economy and mining industry, Nystrom's upcoming project investigates the social and technological history of the Carlin Trend, which was the topic of his Presidential Address for the Mining History Association in 2021.

At ASU, Nystrom teaches courses on the history of engineering, environmental history, public history, and applications of historical methods. Prior to ASU, Nystrom was an Associate Professor of History at the Rochester Institute of Technology, where he taught courses about Las Vegas, national parks, museums, and other public history topics, and won the Richard and Virginia Eisenhart Provost's Award for Excellence in Teaching. Nystrom's recent public history work includes his invited talk for the Arizona Historical Society entitled, "The Senator was a Ham: Barry Goldwater and Amateur Radio." He also appeared in the film "The City of Las Vegas: The Twenties," where he discussed the 1920s railroad strike.