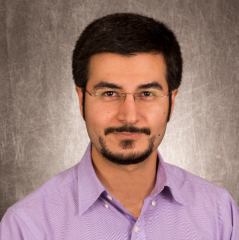 Hamid Marvi is an associate professor of aerospace and mechanical engineering in the School for Engineering of Matter, Transport and Energy at Arizona State University. Previously, he was a postdoctoral fellow at Carnegie Mellon University (2014-2015) and at Georgia Institute of Technology (2013-2014). He received his doctorate in mechanical engineering from Georgia Tech in 2013. His work has been published in several scientific journals, such as Science and PNAS, and has received attention from popular media, such as New York Times, Los Angles Times, Washington Post and BBC. His research aims to study fundamental physics behind interactions of biological systems with their surrounding solid, granular and fluidic environments. Utilizing biological insights derived from these studies, he would like to develop bio-inspired robotic systems and programmable interfacial structures for search and rescue, exploratory and medical applications.