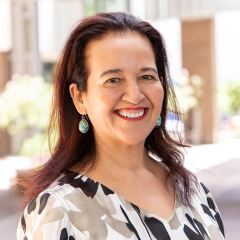 Kate Rosier is the Executive Director of Indian Legal Program at the Sandra Day O’Connor College of Law at Arizona State University.

Kate Rosier, an enrolled member of the Comanche Nation of Oklahoma, serves as Executive Director of the Indian Legal Program (ILP) at Arizona State University College of Law. In this role Rosier leads the ILP’s recruitment and retention efforts and is in charge of the ILP’s development and grant work. Rosier served as Director of the ILP from 2000-2011 and returned as Executive Director in 2014. During her three year absence from the ILP Rosier served as an Assistant General Counsel for the Fort McDowell Yavapai Nation. Prior to joining ASU she worked as a tribal prosecutor for the Gila River Indian Community. Rosier received her J.D. from the University of Utah in 1998 and a BA from Capital University in 1993. Rosier lives in the East Valley with her husband and two teenage children.