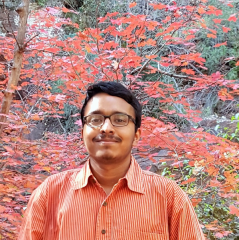 "Look deep into nature and then you will understand everything better”

This universal quotation kept ringing in my mind from my very childhood and inspired me to delve into the enigmatic nature and be enthralled by its complex mechanism of processes, yet simplicity in its existence. Science is the medium to solve the unsolved mysteries of nature. So passionate about science, I opted for studying Chemistry — that presents a molecular picture of nature — for my undergraduate and postgraduate.

Curiosity has always driven me to question everything we see around us and if unanswered has made me search for the truth from a scientific viewpoint. This instinct of my mind along with my admiration for scientists solving real life problems has motivated me to seek a Doctoral degree in Chemical Science. It’s my future goal to engage in research based on Inorganic Chemistry and contribute to the scientific community in the best possible ways. With this vision, I’m applying to the Department of Chemistry at Arizona State University.

Awards and Fellowships: Perseverance and hard work, will bear you the fruits of happiness. I was awarded the JBNSTS (Jagadish Bose National Science Talent Search) Scholarship – one of the most prestigious academic awards in West Bengal and also all over India for students in the undergraduate level. It gave me exposure to the world of modern scientific research and encouraged my longingness to become a researcher. I was also awarded the DST-INSPIRE Fellowship (2011-2016) for my good academic records and this further bolstered my career in Science.

Research Experience: I had got a glimpse of the research world during my undergraduate period thanks to JBNSTS talent enrichment program tour to Bangalore where we had a chance to visit labs of premier institutes like IISc, JNCASR and RRI (Raman Research Institute). Although I was previously determined to do higher studies in chemistry, the most motivating factor for my choosing to pursue graduate studies was my internship in one of the well-equipped labs of Dr. Sebastian C. Peter under the department of Solid State and Inorganic Chemistry in the New Chemistry Unit (NCU) at Jawaharlal Nehru Centre for Advanced Scientific Research (JNCASR), Bangalore. I was privileged to work under a friendly and encouraging lab atmosphere where I was engaged in synthesizing organic-inorganic hybrids of Keggin type heteropolyoxometalates and study their properties for catalysing oxidation reaction of small organic molecules and had also synthesized Anderson type hetero-POM. Polyoxometalates (POM’s) can form 2D or 3D hybrids by binding with some organic ligands such as 4,4’ or 2,2’-Bipyridyl, aminopyridine etc. My job was the hydrothermal synthesis of Keggin phosphomolybdate and phosphotungstate based organic-inorganic hybrid using two different ligands 4,4’-BPy and 4-aminoPy and their applications in fields of catalysis and electrocatalysis. The main aim to synthesize such hybrid POM’s instead of just using normal POM’s was to immobilize them that were otherwise soluble in all common polar organic and inorganic solvents including water and thus would not serve their purpose in heterogeneous catalysis. I had successfully synthesized the Keggin-POM hybrids -- PMo12O40 + Cu + 4,4’-BPy and PW12O40 + Cu + 4,4’-BPy. These were finally used to catalyse oxidation reactions of ethylbenzene, cyclooctene, etc. and were used in electrocatalysis. Their characterization part was really an awesome experience, especially the mounting of the single crystals on glass fibres while viewing them under optical microscope for SC-XRD. The priceless moments of joy whenever a positive result was obtained for any analysis such as the XRD’s of POM’s or the GC-MS of catalysed reaction mixtures and moments of disappointment to meet failure during the CV in electrocatalysis taught me the most valuable lessons about the inevitable ups and downs of research life and the spirit of never losing hope in the direst moments.

The second part of my summer internship was the solution phase synthesis of Anderson type heteropolymolybdate for utilizing it in the synthesis of peptides containing inorganic clusters. Here I learned a new technique of ether vapor diffusion to slowly form pure crystals of the Anderson POM from an aqueous solution of the compound at the interface of ether and water due to less solubility of POM in ether than in water. Although the crystals were not so stable outside solvent, I managed to get the SC-XRD data that were depicting the structures quite well with slight aberrations. All in all my research experience at Bangalore was an eye opener and a refreshing one. To have a knowhow of modern trends in metal ion sensing mechanisms, I have recently opted for my M.Sc. Research Project at IIT-G under the supervision of Professor Gopal Das where I am involved in the research on synthesis and characterization of molecular fluorescence-based turn-on chemosensors for the selective and highly sensitive detection of biologically important metal ions such as Zn2+, Cu2+ and Fe2+/3+ inside live cells. Fluorescence sensors have become an attractive tool for sensing cations, anions and small molecules due to high sensitivity, ease of regulation, robustness and real-time monitoring with fast response. Such metal ions have a plethora of catalytic, regulatory and structural roles in living organisms. Either deficiency or excess of them leads to adverse effects on the body. So the detection of these metal ions in nano to micro level is highly desirable and my project is just based on this aspect.

Energy is the basic need for the sheer existence of all lifeforms. Through ages man has been utilizing the conventional energy sources like coal, petroleum and these fossil fuels although provides huge energy aren’t sustainable at all as they produce an agent of global warming—CO2—and are not limitless or renewable, but are bound to get exhausted in about a hundred years or so. With the ever increasing demand of energy in this generation, it’s the need of the hour to develop the technology by which we can harness the bountiful, renewable resources like solar energy that is both eco-friendly and safe. This field of solar energy harvesting and sustainable energy production is the subject I am immensely interested to do research on. Splitting of water is a very useful technique for harnessing solar energy. It contains two half reactions—water oxidation producing O2, protons and electrons and water reduction utilizing those released electrons to reduce the protons to form H2. The oxidation step is more challenging with a need to lower overpotential, increase catalyst durability and rate of conversion. More specifically I would like to design such catalysts meeting all such requirements to carry out the water oxidation process. Also I would like to work on HER (H2 evolution reactions) catalysed by bio-inspired catalysts. Thus in this way I would like to contribute to the mitigation of energy crisis with a technology that will be sustainable, clean and safe.

Another research interest of mine lies in the field of catalysis of organic reactions and C-H activation using organometallic compounds. This is another challenging field of research requiring the skills to convert reactants to products in one step and thus conserving energy and time.

Why to choose ASU for Ph.D.?:  What inspires me for pursuing graduate studies at ASU is its world class research facilities and its group of excellent scientists whose fields of research are truly intriguing and captivating for me. I am particularly interested in the research of Dr. Giovanna Ghirlanda concerning solar energy conversion and storage. I was motivated by her work that was published in JACS (2014). Water oxidation catalyst using elements like Ru are expensive. So devising a catalyst based on nonprecious materials such as Co, Ni, and Fe is challenging. This work involves the use of Ni(II)-Glycine catalyst to oxidize water at moderate overpotential following an electron-proton coupled mechanism. The catalyst is active for 10 hours. So my aim is to increase its robustness and overpotential.

I am also enthused by the works of Dr. Anne Jones pertaining to solar energy conversion catalysis using redox active enzymes. My imagination is triggered by one of her works published recently in JACS (2015) on hydrogen evolution using more abundant metal Ni-phosphine complex. The results showing a high TOF and low overpotential are very promising in this field helping to design efficient HER catalysts. So I found this aspect of Dr. Jones’ quest to be in line with my research interest.