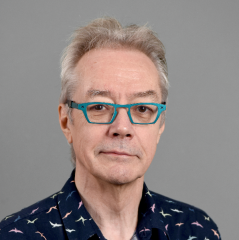 Richard Toon is a research professor at the School for Human Evolution and Social Change (SHESC) where he directs the museum studies program, co-directs the Center for Archaeology and Society, and directs the Deer Valley Petroglyph Preserve and the Innovation Gallery. Before coming to SHESC, he was associate director of research at Morrison Institute for Public Policy. Before joining the Morrison Institute, Toon was the education and research director at the Arizona Science Center, responsible for educational programming and services at the museum. Prior to that he was the center’s research scientist, where he developed research on visitor behavior and attitudes, exhibit development, and informal learning. He also consulted to museums and research projects in Canada and the United Kingdom.

Prior to moving to Arizona, he was the principal of a consulting firm to public and social agencies, primarily in New York City, in the areas of child health, juvenile justice, drug treatment programs, community-based family services, and child poverty. Toon also worked as a researcher for the New York State Department of Criminal Justice Services and was director of operations analysis and management reporting for New York City Department of Juvenile Justice.

As co-director of the Center for Archaeology and Society my research focuses on using museum exhibitions to link past and present by engaging ancient cultures and contemporary issues, most especially in the areas of cultural identity, indigenous peoples, immigration, the challenges of life in arid climates, and social and economic systems. In addition to exhibits, I maintain active research agendas in devising methods for visitor studies evaluation and providing theoretically informed “readings” of cultural heritage museum practices (such as collecting) and the narratives underlying museum exhibitions.