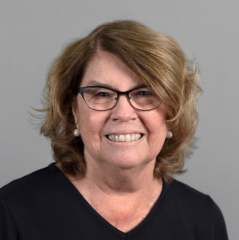 M. Brougham was born on the East Coast in New Jersey and is a true lover of the Jersey shore. She married an Army Military Officer and began her extraordinary life as a military wife!  They lived in Europe for more than eight years and traveled every change they were given. Two of their three children were born overseas. Within the United States, they lived in several different places ending their military life in Washington, D.C.  They later moved to Arizona.

M. Brougham has been a Sun Devil from undergraduate to graduate school, has three amazing adult children (all Sun Devils) and two fabulous grandchildren. She also has four fur grandbabies!

M. Brougham is an avid reader, tennis player, loves the classic movies and spends as much time on the beach as possible. She has a very large shell collection.

My main interest is Military as well as Military Families and have devoted my time and energy in working with Veterans, Retired, Active and Reserve Military, and their families.  I have been involved the various areas:

I have also worked with the homeless population and helped obtain a grant for supporting a shower program/breakfast program within our community.  Now involved with another community program with food drives in association with our students outreach program.

I have the privilege of teaching first-year students in "Introduction to Sociology"  It is truly a privilege to watch their growth from the first day of still being high school seniors and transforming to a university student.

I also teach Human Sexuality, Relationship classes and a course "Working with Military Families.  I developed the course as well as the certificate program.

Every day I come to campus I am excited to share time with my students and also remember the times I walked these sidewalks as a student.