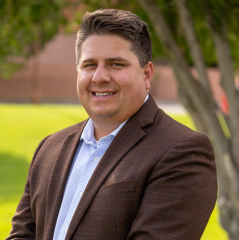 Matt López joined Arizona State University in September 2016 and serves as the associate vice president for Academic Enterprise Enrollment and the executive director of Admission Services. Since he joined ASU, the university has seen record enrollment growth across first-year, transfer and graduate programs.

Lopez's diverse career has established his reputation as one of the leading enrollment professionals in the U.S. He has led multiple university-wide student systems, document management and CRM implementations; played a key role in the creation of an international recruitment and admission team, including as the first director of International Recruitment at a former school; and has served in a lead role in the creation and launch of the University of Utah’s Asia Campus in Incheon, South Korea. Domestically, López is a staunch advocate of access to public higher education and has built many successful access programs and initiatives targeting underrepresented students. Under his leadership, his teams have continuously operated under a student-first culture built upon integrity, inclusion, innovation, data-informed decision making, and the drive for success.

He has held numerous regional and national leadership roles, served as a board member for the Rocky Mountain Association of College Admission Counselors, and served as president for the Association of Chief Admission Officers of Public Universities (ACAOPU) from 2015–2017. He completed his academic work at the University of Colorado Boulder (BA, Molecular, Cellular and Developmental Biology) and University of Colorado Denver (MPA, Public Affairs).