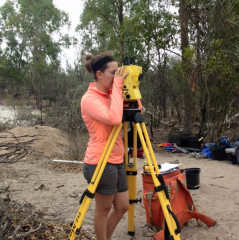 Maryse Biernat is a graduate student in the Evolutionary Anthropology approach at the School of Human Evolution and Social Change and is affiliated with the Institute of Human Origins.  Her research interests include understanding the paleoecological context of early human and mammalian evolution in the Plio-Pleistocene of east and southern Africa. Specifically, Maryse is interested in using fossil mammals to reconstruct hominin paleoenvironments. Her analyses focus on the temporo-spatial differences of mammalian community assemblages.

To investigate the paleoecological context of early hominins, Maryse has participated in several field seasons looking for fossils in eastern and southern Africa.