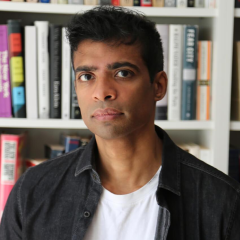 Anand Gopal is an award-winning journalist and assistant research professor with the Center for the Study of Religion and Conflict and the Center on the Future of War at Arizona State University. He holds a Ph.D. in sociology from Columbia University, and specializes in ethnographically based data journalism.

Gopal has reported extensively on Afghanistan, Syria, and Iraq, writing for Harpers, the New Yorker, the Wall Street Journal, the Christian Science monitor, and other publications, while also producing scholarship based on his fieldwork and complex network analysis.

Gopal’s book, No Good Men Among the Living (2014), won the 2015 Ridenhour Book Prize, and was a finalist for the 2015 Pulitzer Prize and the 2014 National Book Award. His recent, pathbreaking piece, “Syria’s Last Bastion of Freedom,” introduces the world to Syria’s revolutionary councils operating outside of regime-held territories. Gopal deftly uncovers the voices of everyday Syrians pursuing of democratic self-rule, offering insight that, until now, had been overlooked beneath the rubble of civil war.

Gopal’s 2017 piece for the New York Times Magazine, “The Uncounted” (co-written with Azmat Khan), won the 2018 National Magazine Award, 2018 Ed Cunningham Award for Best Magazine Reporting, and the 2018 Hillman Prize for Magazine Journalism. His 2017 article for The Atlantic, “The Hell After ISIS,” was recognized with a George Polk award.

Gopal is also a co-director, with John Carlson and Kristin Gilger, of “Religion, Journalism and Democracy: Strengthening Vital Institutions of Civil Society,” a project that helps train journalists and scholars of religion in more nuanced approaches to public engagement around issues of religion, politics and war.