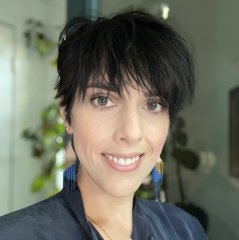 Heidi Hogden is an artist who joined Arizona State University as an assistant professor in 2017. She was formerly a visiting professor/artist-in-residence at the University of Arkansas at Little Rock (2015-2017), a visiting assistant professor of painting at the University of South Dakota (2014-2015) and a post-graduate teaching fellow at the School of the Museum of Fine Arts, Boston (2011-2014). Hogden received a BFA in painting from Minneapolis College of Art and Design in Minneapolis, MN (2008) and a MFA in studio art from the School of the Museum of Fine Arts in affiliation with Tufts University in Boston, MA (2012). Her primary research interests include human-induced environmental changes as they relate to location, the examination of the natural world through visual art, and the sampling from historical artworks, techniques, and subjects through a contemporary lens. Hogden received an artist’s grant to attend the Vermont Studio Center Artist Residency in Johnson, VT (2014 and 2018) and an Windgate Artist-In-Residence from the University of Arkansas at Little Rock, AR (from 2015 to 2017). Hogden’s work has been published in the Boston Globe (2012), Studio Visit Magazine (2018), and Manifest’s International Drawing Annual (2016 and 2020). She has had the opportunity to show and present her work in numerous solo exhibitions including the McGladrey Art Gallery at Bentley University in Waltham, MA (2013), the Fine Arts Center Gallery at Arkansas State University in Jonesboro, AR (2019), and the CICA Museum in Seoul, Korea (2021). Her work has also been exhibited in numerous group exhibitions, including the Courtyard Gallery at the Museum of Fine Arts, Boston, MA (2012), the South Dakota Art Museum in Brookings, SD (2014), and the Arkansas Art Center in Little Rock, AR (2016), among others. Her exhibition record reflects both a dedication to drawing as a creative practice and an intellectual curiosity that connects the practice of drawing to larger fields of inquiry and community building projects.

Heidi Hogden specializes in graphite drawings that look to the natural world to understand the relationship between place and identity on a symbolic level. The imagery for these works are inspired by direct observational experience, memory, collected objects, and photographic source material. Additionally, these works address environmental issues with goal of enhancing our sensitivity to the natural world. This work enables her to express her own history and personal narrative, while researching contemporary drawing, local environments, and autobiography as a form of storytelling.