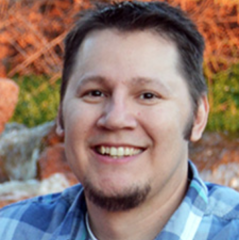 Jeffrey Holmes is an Instructor in Film and Media Studies within the Department of English. He received his PhD in Rhetoric, Composition, and Literacry from Arizona State University. His research focuses on the changing landscape of teaching and learning both in schools and in informal settings, in particular through digital media and distributed teaching and learning systems. He has published in academic journals such as On the Horizon and Well Played and regularly presents at conferences such as the American Educational Research Association (AERA), Games+Learining+Society (GLS), Association of Internet Researchers (AoIR), and the Rhetoric Society of America (RSA). He has also consulted on projects around the globe, including UNESCO, the Mahatma Gandhi Institute of Peace and Sustainable Development, the Toronto Public Libraries, State Libraries of New South Wales, and Pearson, LLC.