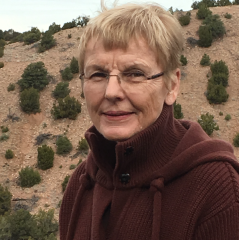 Gitta Honegger is the authorized translator of 2004 Nobel laureate Elfriede Jelinek. Her most recent translation “On the Royal Road: The Burgher King” is Jelinek’s immediate response to Donald Trump’s election, a play which she started to write the day after his victory was announced. The world premiere staged reading of the play in April 2017 (six months before the fully staged German world premiere in Hamburg) was presented in Professor Honegger’s translation at New York’s Martin E. Segal Theater Center, just a few blocks down from Trump Tower, to international media acclaim. Honegger just finished her translation of Jelinek’s opus magnum, the 666 page novel “The Children of the Dead,” to be published by Yale University Press. She is a Guggenheim and Fulbright/IFK Fellow.

Professor Honegger’s book "Thomas Bernhard: The Making of An Austrian" received the Austrian Cultural Forum’s bi-annual book award. Her own German translation "Thomas Bernhard – Was ist das für ein Narr" was published in Berlin by Ullstein/Propyläen in 2003. She is a contributing editor of Yale Theatre Magazine and has translated the plays of Thomas Bernhard, Peter Handke, Franz Xaver Kroetz, Marieluise Fleisser and Nobel Prize winners Elfriede Jelinek and Elias Canetti among others. Her articles on theatre and culture have been published in Theater, Modernism/Modernity, Studies in Twentieth Century Literature, American Theatre, Western European Stages, Performing Arts Journal, Partisan Review.

From 1983-1993, Honegger served as professor of dramaturgy and dramatic criticism at the Yale School of Drama and as resident dramaturg of the Yale Repertory Theatre, where she also directed. She also worked many summers as a director and dramaturg at the Eugene O’Neill National Playwright’s Conference. Before coming to Arizona State University in 2001, she was chair of the Drama Department at the Catholic University of America (1993–2001). Honegger received her theatrical training in Vienna, Austria and performed at the Vienna Burgtheater, the Schauspielhaus Zürich, and the Komödie Basel, to name a few. She holds a Ph.D. in Theaterwissenschaft from the University of Vienna and first came to the United States to research her dissertation on Eugene O’Neill.

Elfriede Jelinek: On the Royal Road: The Burgher King

Rechnitz and The Merchant’s Contract: The complete performance texts by Elfriede Jelinek

Peter Handke: The Hour We Knew Nothing of Each Other and Play of Questions

Thomas Bernhard: The Making of an Austrian; A cultural biography

Innovative trends in contemporary theatre, performance and the arts