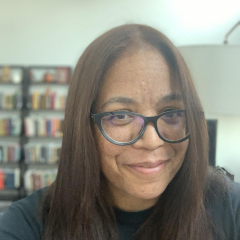 Brandi Adams is an assistant professor in the Department of English and member of the Arizona Center for Medieval and Renaissance Studies. Her interests include book history, history of reading, early modern English drama, and premodern critical race and gender studies. Having formerly served as an undergraduate program manager at the Massachusetts Institute of Technology, she also researches the early history of artificial intelligence, early modern automata and how studying literature can have a significant and positive impact on computing.  In addition to articles and reviews published in the journal Shakespeare, Shakespeare Survey, The Cahiers Élisabéthains, and Early Theatre, and in volumes including Shakespeare/Text, she is researching and writing her first monograph entitled Representations of Books and Readers in Early Modern English drama (1580-1640).