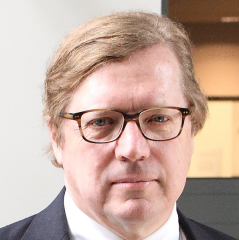 Professor Scheffer is Vice-President of the American Society of International Law, Senior Fellow of the Council on Foreign Relations, and International Francqui Professor at KU Leuven, Belgium. He holds the Practitioner Residency of the Rockefeller Foundation Bellagio Center in 2022.  He was the Tom A. Bernstein Genocide Prevention Fellow at the U.S. Holocaust Memorial Museum (2019-2021).  From 2012 to 2018 he was the U.N. Secretary-General’s Special Expert on U.N. Assistance to the Khmer Rouge Trials.  Professor Scheffer was the first U.S. Ambassador at Large for War Crimes Issues (1997-2001) and led the U.S. delegation to the U.N. talks establishing the International Criminal Court.  He negotiated the creation of five war crimes tribunals and chaired the Atrocities Prevention Inter-Agency Working Group (1998-2001). His latest two books are "All the Missing Souls: A Personal History of the War Crimes Tribunals" (Princeton 2012) and "The Sit Room: In the Theater of War and Peace" (Oxford 2019).

Professor Scheffer received the Berlin Prize in 2013, the Champion of Justice Award of the Center for Justice and Accountability in 2018, and the 2020 Dr. Jean Mayer Global Citizenship Award, Global Leadership Institute, Tufts University.  Foreign Policy magazine selected him as a “Top Global Thinker of 2011.”  He is a member of the New York, District of Columbia, and Supreme Court bars.  Professor Scheffer is a graduate of Harvard College, Oxford University (where he was a Knox Fellow), and Georgetown University Law Center.