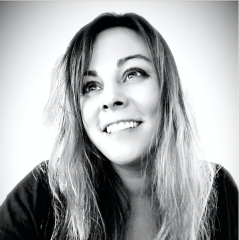 Ana Herruzo is an architect, interactive designer, and educator working in emerging and computational media. Her focus is on the incorporation of lighting, audio and video with the physical environment, and human interaction. Synthesizing disciplines, she creates spatial experiences for a wide range of applications and audiences such as art installations, live music events, film, and architecture.

Ana has over 10 years of professional experience working with new media tools. She is the co-founder of art collective NaiveLaser and interactive agency VirtuLabs where in addition to creative, she adds the necessary technical direction and engineering skills to multidisciplinary projects. Prior to that, she worked as an Interactive Engineer at the world-leading creative studio Obscura Digital, for 5 years. While at Obscura she led the development of large scale productions, ranging from immersive experiences, real-time visuals, audio-reactive event pieces to interactive multi-display and multi touch installations. Some of the clients she has worked directly with are NASA, Google, Nike, Spotify, Warner Brothers to name a few. Several of the projects in which Ana led the development, have won awards and had great recognition, some examples are: “Emergence” project for the opening of the new Exploratorium Museum, won “Best Public Art-chitects for the SF Guardian’s ‘Best of the Bay 2013’ and the LUMINA Panoramic Gallery Display which won the “Internationalist Award for Innovation in Media''. Ana’s work has been awarded and published globally on numerous renowned platforms.

Ana’s interdisciplinary research is also grounded in academia where she focuses on experiential design, extended realities and emerging media ethics. She is an Associate professor at Arizona State University at their new Media and Immersive eXperience research center (MIX). Prior to this she was the director of the Applied Computer Science - Media Arts  department at Woodbury University, in Los Angeles. Ana has taught at multiple institutions such as University of Texas in Austin, University of California Los Angeles, among others.