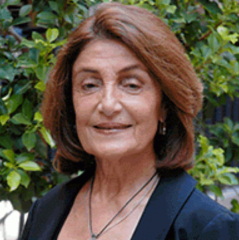 Emilia E. Martinez-Brawley is the John F. Roatch Distinguished Professor at Arizona State University. She is the former dean of the School of Social Work, having served in that capacity from 1992 to 1998. She was professor of social welfare in the Sociology Department at Penn State University from 1978 to 1992 and prior to that, was assistant professor at La Salle College and Temple University in Philadelphia.

Martinez-Brawley is the author of six books: "Close to Home: Human Services and the Small Community" (NASW Press, 2000), "Pioneer Efforts in Rural Social Welfare" (Penn State Press, 1980), "Seven Decades of Rural Social Work "(Praeger, 1981), "Rural Social and Community Work in the U.S. and Britain" (Praeger, 1982), "Perspectives on the Small Community" (NASW Press, 1990) and "Transferring Technology in the Personal Social Services" (ed., NASW Press, 1993). Martinez-Brawley is also author of more than 90 articles in the areas of rural communities and rural services, research paradigms, social work education, innovative models of service delivery in public organizations and diversity issues in service delivery. Most recently, she has written about immigration issues in the Southwest from a global comparative perspective. Her research and writings are internationally known. Her work has appeared in Social Work, the Journal of Education for Social Work, the Peabody Journal of Education, Social Casework, Arête, Community Development Journal, The British Journal of Social Work, The European Journal of Social Work, Human Services in the Rural Environment, Sociology and Social Welfare, The Journal of Multi-Cultural Social Work, The Australian Journal of Social Work, International Social Work, NASW News, Portularia, a Spanish journal, CentrA, a publication of the Fundación de Estudios Andaluces, Savia, a Mexican Journal,and others.

Martinez-Brawley carried out research on rural services and lectured in Canada, Latin America, Great Britain, the Republic of Ireland, Australia, Spain and Norway. She has been a visiting lecturer at the University of Ballarat, Victoria, Australia, at the University of Regina, Saskatchewan, Canada; a visiting fellow at the School of Economic and Social Studies of the University of East Anglia in Norwich, England; a guest faculty member at the University of Western Australia in Perth; a consultant on rural and evaluative issues for the European Centre for Social Welfare Research, an arm of the U.N. in France and Spain; a guest faculty members at the "Consejo Superior de Investigaciones Científicas" in Madrid, Spain, and a consultant on rural development for projects in Murcia, Navarra and Catalonia, Spain, and Western Australia. She has also lectured in universities in Seville, Huelva, Granada, Zaragoza and Valladolid and was involved in the development of an immigration and social services doctorate in Huelva. Most recently, she was an invited Senior Fulbright Fellow at the University of Keele in England. Martinez-Brawley has also had Fulbright awards to Australia, Israel, Spain and the U.K and served on the Discipline Advisory Committee for Fulbright Scholar Awards for the Council for International Exchange of Scholars (CIES). She has been a member of the Commission on Accreditation of the Council on Social Work Education (CSWE) and has served on many accreditation visits for the Middle States Association of Colleges and Universities. She is a former vice president of the National Board of the National Association of Social Workers (NASW). She completed a web-based curriculum project on Intercultural Harmony sponsored by the Musser Fund and is currently consulting on program development in social work at Clark/Atlanta University in Georgia.