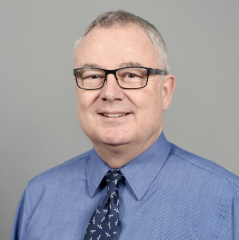 First, he works as a data warehouse developer in the University Technology Office, Data Intelligence/Data Structures team.  Prior to his current position, he was a mainframe database administrator supporting IDMS and DB2.  Dennis also has a background in application programming.

Secondly, he is also an Instructional Professional in jazz trumpet at the ASU Herberger School of Music.  He has performed with such celebrities as Mel Tormé, Tony Bennett, Johnny Mathis, and The Temptations, as well as playing countless off-Broadway musicals. He has been playing lead and jazz trumpet in several big bands, most recently with the New Guard Big Band.  Dennis spent several years studying and playing in the Los Angeles music scene. While there, he had an opportunity to study trumpet with such diverse teachers as Bob Findley, Mario Guarneri, Uan Rasey, James Stamp, and George Werth. He also studied jazz privately with vibraphonist Charlie Shoemake.

More information on Dennis at dennismonce.com