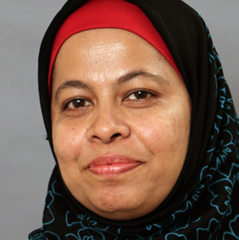 Sharmin Karim received her master’s degree in financial mathematics from Kaiserslautern University, Germany in 1999. She received her bachelor’s and master’s degrees in finance and banking, University of Dhaka, Bangladesh in 1995 and 1996, respectively. She has been employed at Arizona State University since 2014, teaching a variety of first-year math classes both online and in person in the adaptive learning system. She also worked as an instructor at Arizona State University from 2004 to 2008 and as an adjunct faculty member at Mesa Community College and Scottsdale Community College from 2008 to 2014. She worked as a member at Math Modules for College Readiness Project under Maricopa Community College district office. Her research interest is working on developmental mathematics with diversified population.