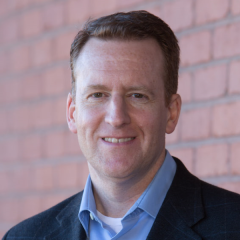 John Carlson is director of the Center for the Study of Religion and Conflict at Arizona State University where he is also associate professor of religious studies.

A scholar of religious ethics, his research explores how religious and moral inquiry informs and invigorates our understanding of political life. He has written on issues of war and peace, religion and violence, justice and human rights, democracy and civic life, and a variety of social and political issues, both domestic and international.

Professor Carlson is coeditor of, and contributor to, three books: "From Jeremiad to Jihad: Religion, Violence, and America" (California, 2012); "Religion and the Death Penalty: A Call for Reckoning" (Eerdmans, 2004); and "The Sacred and the Sovereign: Religion and International Politics" (Georgetown, 2003). He is the author of 25 book chapters and articles from leading journals in his field as well as numerous shorter essays. Currently, he is working on a monograph entitled "Justice This Side of Heaven: Human Nature, Religion, and the Moral Order of Politics," a political-theological examination of how ideas about human nature and the divine shape our political pursuits of justice. He is past president of the Niebuhr Society and currently co-chairs the Religion and Politics steering committees of the American Academy of Religion.

His public scholarship includes reflections on democracy, civil religion, and the truth divide. You can find them by clicking on the "Research" tab above.

Carlson has been a principal investigator or co-PI on numerous research projects sponsored by the Herny R. Luce Foundation, the Ford Foundation, the American Council of Learned Societies, and other agencies. He is currently co-director (with Tracy Fessenden) of the Recovering Truth project, which produces a regular podcast.

"Rights versus Right Order: Two Theological Traditions of Justice and Their Implications for Christian Ethics and Pluralistic Polities," Journal of the Society of Christian Ethics 36, no. 2 (Fall/Winter 2016), pp. 79-100.

"Reinhold Niebuhr and Richard John Neuhaus: Religion and American Public Life in the Twentieth Century and Beyond," Political Theology 14, no. 3 (2013), pp. 362-374.

"Cashing in on Religion's Currency? Ethical Challenges for a Post-secular Military," Review of Faith and International Affairs 7, no. 4 (Winter 2009), pp. 51-62.

"God's Disbelief and Ours: Religious Perils and Possibilities of Human Rights," Religion and Human Rights (Nijhoff/Brill, May 2006), pp. 5-15.