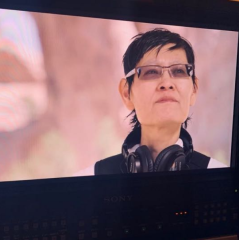 H. L. T. QUAN is a political theorist and an award-winning filmmaker. Currently she is an Associate Professor of Justice and Social Inquiry in the School of Social Transformation at Arizona State University. She is also an affiliate faculty member in African/African American Studies, Asian Pacific American Studies, Women's and Gender Studies, and the Sidney Poitier New American Film School at ASU. Her research and teaching focus on radical thought and praxis, including feminist consciousness and activism, utopian thought and speculative living, data justice, and the Black Radical Tradition.

Quan is the author of Growth Against Democracy: Savage Developmentalism in the Modern World (Lexington Books, 2012) - a radical critique of modern development and economic thought, including neoliberalism, and the editor of Cedric J. Robinson: On Racial Capitalism, Black Internationalism, and Cultures of Resistance, (Pluto Press, 2019). She recently completed her monograph, Against Tyranny: A Feminist Ethic for Democratic Living - an in depth study of willful refusals against various terms of order.

As a filmmaker, she collaborates with C.A. Griffith, including co-producing/directing three feature length documentaries, Mountains That Take Wing: Angela Davis & Yuri Kochiyama - A Conversation on Life, Struggles, & Liberation (2009); America’s Home (2014), a film about gentrification and displacement in Puerto Rico; and Queer, Broke & Amazing! (2022), a film on LGBTQ+ people in the United States and their struggles for economic justice. In 2020, Quan was the Editor in Residence for the social justice related blog Praxis, featuring more than 40 unique essays from writers from all over the world.

She and C.A. Griffith co-founded QUAD Productions, a non-profit media collective in 1999. Through QUAD, they have produced over a dozen short and three feature-length documentaries – all focusing on various social justice campaigns. In spring of 2010, QUAD co-produced the short documentary Arizona Women and Children Rise: Resisting SB1070 in collaboration with Third World Newsreel (TWN) for the National Day Laborer Organizing Network, National Domestic Workers Alliance and Puente Movement. QUAD’s footage was quickly edited in New York by TWN to create an eighteen-minute cut that was sent to the White House and members of Congress in May 2010 to challenge Arizona's racist, anti-immigration law. For more information on Quan and Griffith's feminist film praxis see their interview with Chandra Talpade-Mohanty and Linda E. Carty in the Feminist Freedom Warrior Video Archive.

Professor Quan has been an educational volunteer for the College Program at a federal prison in Arizona for more than 15 years.