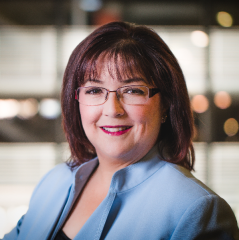 Melissa Goitia Werner, CSEP, is Executive Director of the Office of University Events & Protocol and the Office of University Ceremonies. She is a Protocol Officer at Arizona State University and the co-founder of the North American Association of Commencement Officers (NAACO). Melissa has more than 30 years experience in event production and has produced commencement and other ceremonies for ASU for more than 20 years.

In May 2009 Arizona State University hosted the largest graduation ceremony in the United States. More than 68,000 people attended Spring Commencement at which President Barack Obama gave the first graduation address of his presidency.

Melissa has presented educational sessions at a number of conferences on a variety of graduation-related concerns including workshops on establishing mission statements for ceremonies, academic versus non-academic ceremonies, volunteer recruitment and retention, as well as how to establish and run graduation convocation events for colleges and special interest groups.

In 1999 Melissa and Carol Switzer, former director of ASU Summer Sessions, co-founded the North American Association of Commencement Officers, a professional association for commencement and graduation planners from across the United States and Canada. NAACO has over 350 member institutions and hosts an annual conference for graduation professionals.

Melissa is a Certified Special Events Professional (CSEP) and holds a Bachelor's degree in Journalism and Public Relations from the Walter Cronkite School of Journalism and Mass Communication at Arizona State University and a Masters degree in Educational Leadership from Northern Arizona University. She completed training as a Protocol Officer and is a certified Intercultural and Etiquette and Protocol Trainer through the Protocol School of Washington® and has completed a certificate in Hospitality & Tourism Management Certificate through Florida Atlantic University

Ceremony production and logistics and scheduling.

Ceremony and ritutal - how ceremonies are constructed, the meaning of ceremony