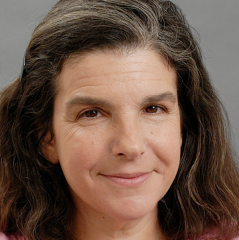 Susanna Fishel works in enumerative and algebraic combinatorics. Combinatorics is the study of discrete objects: for example, subsets of a three element set; distinct necklaces of three red beads and four blue beads; paths from (0,0) to (n,n) on a grid; distinct ways to write an integer n as a sum of positive integers.  Enumerative combinatorics focuses on counting discrete objects. (Answers for the examples above are, respectively: 8, 4, (2n)!/n!n!, and unknown!). Algebraic combinatorics is the study of discrete objects where either the techniques used, or the objects themselves, arose naturally from algebra. These problems often come from other areas of math, physics, and computer science.  For example, the techniques used recently to solve a long-standing open problem in operator algebras (the Kadison-Singer Conjecture) were essentially combinatorial.

In particular, Fishel studies the combinatorics of Catalan objects, a topic with many wonderful and surprising connections to other areas of math.