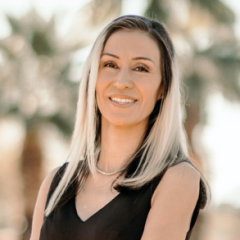 After earning her doctorate in applied mathematics at Cornell University in 2003, Erika T. Camacho spent a year as a postdoctoral research associate at Los Alamos National Laboratory. She then held a tenure-track faculty position at Loyola Marymount University, while also co-directing the Applied Mathematical Sciences Summer Institute (AMSSI), before arriving at Arizona State University in 2007. She is an associate professor in the School of Mathematical and Natural Sciences, but also continues to serve as co-director of AMSSI. She was also co-principal investigator for two grants from the National Security Agency providing funding for the summer institute.

Camacho conducts research at the interface of mathematical applications to biology and sociology. Some of her projects include mathematically modeling the transcription network in yeast, the interactions of photoreceptors, social networks, and fungal resistance under selective pressure.

Among the publications she has co-authored are "Positive influence dominating set in online social networks" in Lecture Notes in Computer Sciences; "Dynamics of Two van der Pol Oscillators Coupled via a Bath" in International Journal of Solids and Structures; "‘Traveling Wave' Solution of FitzHugh Model with Cross-Diffusion" in Mathematical Biosciences and Engineering; and "Alcohol's Effect on Neuron Firing" in The Mathematical Scientist.

Camacho has received various awards including a citation from the U.S. National Security Agency for her excellent work in mentoring and guiding undergraduate research. She has made extensive contributions of service and outreach at the national level, such as serving as a member of the Diversity Advisory Committee for the Society of Industrial and Applied Mathematics (SIAM), the Advisory Board for the Center for Undergraduate Research in Mathematics (CURM), the task force for expanding mathematical activities at SACNAS, and the Panel on Undergraduate Math-bio Programs (PUMP). She is a Ford Fellow, Sloan Fellow, and a Mellon Mays Fellow.

Camacho's invited presentations range from panel presentations, research talks, and keynote addresses on "Overcoming Adversity," "The Forces Behind my Drive, Before, During, and After Graduate School," "Taking the Next Steps," and "Mentoring for Success - A Mathematical Perspective," the latter before the Associateship and Fellowship Program Advisory Committee of the National Academies of Science.