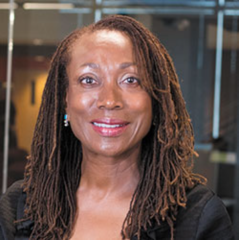 RETHA HILL is on the faculty of the Walter Cronkite School of Journalism and Mass  Communication at Arizona State University where she is the executive director of the New  Media Innovation and Entrepreneurship Lab. The Lab’s journalism and computer science majors  create innovative products, including virtual, augmented and mixed reality apps and content;  Web applications; news game tools; social media tools and mobile apps for media clients. On  the entrepreneurship side of the Lab, students create their own media companies and  products.

Hill joined the ASU faculty in 2007 after eight years at BET, where she was vice president for  content for BET Interactive. Before joining BET, Hill was executive producer for special projects  at washingtonpost.com. She was a founding editor of Washington Post Newsweek Interactive.

She started her career as a reporter for The Charlotte Observer, followed by The Washington  Post. She is writing a book on blacks and dementia. She is a co-founder of Playable Media, LLC,  an education technology and serious game design company. The company created the fake  news game simulator, “Hoaxes & Havoc,” a game about sexual harassment in the workplace  called “Inappropriate Behavior,” among other titles.