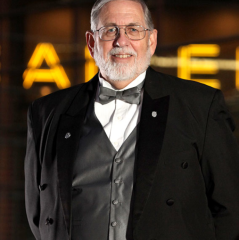 Michael Willson holds the degrees of Bachelor of Music Education from Brigham Young University, and Master of Music and Doctor of Music Education from Arizona State University. For 30 years Dr. Willson taught music education in public schools in Arizona and has recently retired as Director of Bands at McClintock High School in Tempe. He is an active member of the Arizona Music Educators Association (AMEA) and the Arizona Band and Orchestra Directors Association (ABODA). He has served two terms as President of ABODA. He continues to serve as a guest conductor and clinician throughout the United States.

Dr. Willson is the founder and conductor of the Tempe Winds, a group of forty-six professional musicians dedicated to the performance of outstanding wind/band literature. In December of 1995 the ensemble performed at the 49th Annual Mid-West International Band and Orchestra Directors Clinic in Chicago, which was attended by some 10,000 music educators from around the world. In December of 2002 the wind ensemble received the “Sudler Silver Scroll  Award” from the John Philip Sousa Foundation for outstanding musical achievement and service to the community. He is also active in choral and orchestral music performance, having conducted a number of community ensembles.

Dr. Willson has received the “Excellence in Teaching Award” from the Tempe Union High School District, the “Excellence in Teaching Music” award from the Arizona Music Educators Association, and the “Award of Excellence- Outstanding Teacher, Fine Arts” from the Tempe Diablos. In March of 1992 Willson was selected to “The Legion of Honor” by The John Philip Sousa Foundation and Band World Magazine, an award given each year to “Ten of the Best” public school band directors in the country. In January of 2007 Willson received the “Music Educator of the Year” Award from the Arizona Music Educators Association and the “Alumni of the Year” Award from the School of Music at Arizona State University. In 2017 Willson was inducted as a charter member of the newly organized Arizona chapter of Phi Beta Mu and elected Vice President/President Elect. He was also inducted as an honorary member of the ASU chapter of Kappa Kappa Psi.