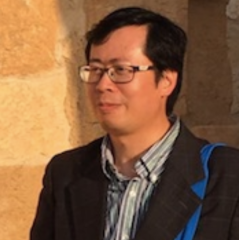 Huaiyu Chen is an associate professor of religious studies at the School of Historical, Philosophical, and Religious Studies, with a joint appointment at the School of International Letters and Cultures. He has also held several visiting positions in North America, Europe, and Asia, such as a membership of the Institute for Advanced Study in Princeton in 2011-2012, a Spalding Visiting Fellowship at Clare Hall of Cambridge University in 2014-2015, a visiting professorship at Beijing Normal University in June-July 2015, a visiting scholarship at Max Planck Institute for the History of Science (MPIWG) in Berlin in June-July, 2018, and a visiting scholarship at Institute for Religions and Ethics of Tsinghua University in August, 2018.

My research interests include cultural and religions links between China and Central/South Asia, Buddhism and Nestorian Christianity, Religions on the Silk Road, Dunhuang Manuscripts, cultural and religious history of medieval China, Buddhist rituals and monasticism, and modern Chinese intellectual history.

1.     Buddhism, Christianity, and Daoism along the Silk Road.

1. October 26-28, 2017. “The Rise of the “Asian History” in Mainland China in the 1950s: A Global Perspective.” The Conference “Conceptions of the World in Twentieth-Century Chinese Historiography.” University of Göttingen, Germany.

American Association for the Advancement of Science