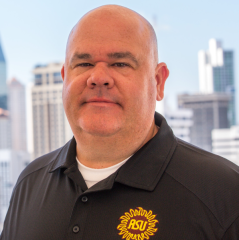 He also oversees Student Media and Student Creative Services, where the next generation of media professionals receive hands-on, real-world training, while working to further the university's goals and initiatives.

As a Professor of Practice in ASU's Walter Cronkite School of Journalism, Manning teaches courses focused on digital technology, political communication, and depth reporting. He created and taught the Cronkite School's first Web and social analytics course. He also created and taught the freshman seminar "Technology & Journalism," which introduced students to the revolutionary changes in the profession over the last 25 years.

He has trained international journalists, in locations as varied as the Dominican Republic, Botswana, and Pakistan.

Manning also serves as director of ASU Student Media and publisher of ASU's award-winning student newspaper, The State Press, which shifted from daily print to all-digital in 2014 -- the first major college newspaper to do so.

Prior to his service at ASU, Manning worked as a journalist for The Washington Post, PBS NewsHour, and U.S. News & World Report.