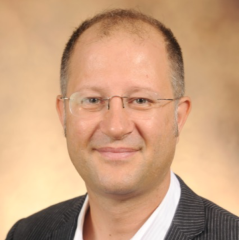 Marco Mangone joined the faculty of ASU in August 2011 after completing his postdoctoral fellowship in the Center for Genomics and Systems Biology at New York University. He is an assistant professor in the Biodesign Virginia G. Piper Center for Personalized Diagnotics and the School of Life Sciences at ASU.

He is interested in study how eukaryotic RNA transcription is terminated and how the messenger RNA is regulated on its way to the expression into proteins, using the wound worm C. elegans as model system. C. elegans is a transparent, free-living soil nematode that shares many biological similarities with humans, and has been used to model many aspects of human biology, such as development, learning and memory, mechanisms of aging and cell death.

His research focuses to the analysis of 3'Untranslated Regions (3'UTRs); sequences located between the STOP codon and the polyA tail of mature messenger RNAs. 3'UTRs contain elements targeted by many non-coding RNAs and proteins that bind and repress the translation of the mRNA into protein. The majority of these elements are unknown, but they have been found to play key roles in diverse developmental and metabolic processes, and are implicated in disease, including diabetes, Alzheimer's and cancer.

Recent analysis of genome-wide data in human, mouse, worms, plants and yeast showed that alternative polyadenylation (APA), a mechanism in which the same gene has multiple 3'UTR isoforms, is pervasive in eukaryotes. It is not known why eukaryotic mRNAs require so many 3'UTR isoforms. Professor Mangone suspects that APA provides a powerful regulatory mechanism, perhaps to regulate gene expression in a tissue-specific manner or in different developmental contests.

Professor Mangone's approach combines high-throughput genomics, bioinformatics, genetics, biochemistry and systems biology to answer the following fundamental question: How does the termination of transcription work in eukaryotes? What are the mechanisms behind alternative polyadenylation? Why is it so widespread in metazoan transcriptomes? How does it impact gene regulation at a post-transcriptional level? What are the mechanisms of 3'end formation that ultimately determine how a gene is regulated? Dr. Mangone lab uses standard molecular biology and bioinformatics to study the production, function, and disease contribution of 3’untranslated regions (3’UTRs) and their role in modulating gene expression, taking advantage of both C. elegans and human genomics. Please use this link for more information.

Average number of citations per article: 125.38