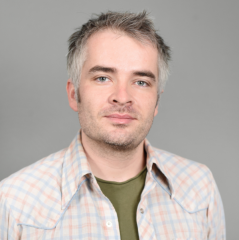 Christopher Norby has established himself as a composer, performer and teacher through a wide range of international artistic experience in live theatre, concert composition, video game music, film/TV scoring and live performance. His commissioned concert and theatre works have been performed in major venues and festivals internationally (including performances at the Royal Festival Hall and Covent Garden, London, the National Gallery of Ireland, Dublin, and at the International Rostrum of Composers concerts, Slovenia). As a film and media composer, Christopher has completed scores for multiple iOS and Android releases and national USA television. He was a co-founder of the theatre ensemble AnNua Productions (Ireland, Australia), with which he continues to work, and in 2017 established Ensemble Kabarett in Phoenix - a multimedia live performance group that is gaining recognition for innovative and entertaining productions. Christopher also has much experience as a freelance performer across multiple genres, having contributed to multiple CD releases and live television and radio performances as a keyboardist and arranger. Christopher has taught composition related courses through the University of Ulster, Valley City State University and in various private and community based settings. He currently teaches composition for film and media at Arizona State University. Christopher holds a PhD in composition from the University of Ulster, Ireland.

Thesis title - Maintaining Pleasure in Composition: Cultural and Philosophical Issues Affecting My Work as a Composer