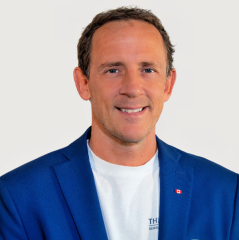 He became the Academic Director for the Business English Communications program (formerly the preMBA/EBC program) late 2011. He recently accepted (July 2012) the Director of GMAT/TOEFL programs here on campus where his responsibilities include the marketing, pricing, and selling of the face-to-face versions of these programs. Teaching responsibilities include case studies review and reading strategies to corporate clients as Cummins, JAFRA, Morinaga Foods, BP, U of Chile, Goretex, SK, DENSO, CBSD, INAX, and NOMURA Research Institute. He developed an online TOEFL program (originally for GM now for open for any clients) and developed an online GMAT program.

Before Thunderbird, Mr. Gemmiti taught Mathematics, Computer Programming and English for a cumulative 13 years in Kingston Ontario Canada He also taught Business English in South Korea back in 1997/98. He has also worked in Australia (1988), Greece (1996), and as a Project Coordinator/Trekking Guide for Volunteer Abroad in the Mt. Everest region of Nepal (spring 2001, 2003, 2004). In 2008 he spent a month in Ghana Africa (spring 2008) where he was developing new adventure travel programs for BaseCamp Centers International (http://www.volunteerbasecamp.com/). Steve is a shareholder in the company, and he sits on the Board of Directors. From 2005 through the end of 2007, he also worked as a business operations Consultant for a local roofing company where he oversaw developing, implementing, and then monitoring a self-insured corporate safety program. He was able to reduce expenditures by over 93% with his new processes and programs.

Mr. Gemmiti holds Bachelor of Science degrees in mathematics and computer programming from Trent University and an honors degree in mathematics from Queen's University. He received his Bachelor of Education degree from Queens University as well. His focus in mathematics was linear programming and his computer programming languages were on COBOL, Fortran, and Pascal. Steve is an avid explorer/traveler covering 45 countries spanning 6 continents and can boast that he has played football (soccer) on every continent he has visited thus far. His passion for football has seen him play (and captain) at the university level (both for Trent and Queen's) and play for a British team (based in Seoul, Korea) at the Manila World 6v6 International tournament. He has also played competitive ice hockey, rugby, and basketball. He is passionate about ocean surfing, windsurfing, rock climbing, scuba diving, mountain biking, snowboarding, snow shoeing, and spends most of his weekends out camping/hiking during all 4 seasons.

With the ASU/Thunderbird merger in 2015, he started working with the undergraduate program as an Academic Success Specialist, filled in for Recruiting, and was the Internship/ Community Engagement coordinator Sr. up until 2019. He helped create and started teaching TGM191, Thunderbird's ASU101 equivalent class. In 2020 he developed and teaches TGM391, a course that specifically helps students improve their critical thinking/presentations/networking skills specifically designed for Thunderbird student success.

From 2019-2022, he served as the Associate Director of Professional Development & Communications for the Master of Applied Leadership & Management program (MALM), with a focus on coaching/employer relations.

In Summer 2022, he took over as Director of Online Programs and is responsible for the growth and advancement of Thunderbird’s Master of Leadership & Management (MLM) program, and the undergraduate Bachelor of Global Management (OBGM) and Bachelor of Science in International Trade (OBSIT) programs.

He continues to lend his expertise in the business communications field and deliver courses through Thunderbird’s Executive Education custom programs where needed.