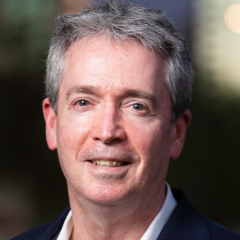 Michael Scott is a clinical professor at Arizona State University’s School of Criminology and Criminal Justice at Arizona State University and the director of the Center for Problem-Oriented Policing, a research center that produces and disseminates information about how police can effectively and fairly address specific public-safety problems. Scott was formerly a clinical professor at the University of Wisconsin Law School; chief of police in Lauderhill, Florida; special assistant to the chief of the St. Louis, Missouri, Metropolitan Police Department; director of administration of the Fort Pierce, Florida, Police Department; a senior researcher at the Police Executive Research Forum (PERF) in Washington, D.C.; legal assistant to the police commissioner of the New York City Police Department; and a police officer in the Madison, Wisconsin, Police Department. In 1996, he received PERF's Gary P. Hayes Award for innovation and leadership in policing.