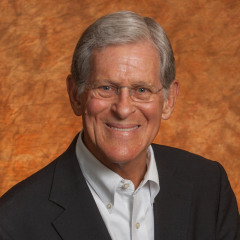 Dale Furnish joined the faculty in 1970, following a clerkship with Judge Martin D. VanOosterhout of the 8th U.S. Circuit Court of Appeals and stints in Peru with USAID and in Chile with the Ford Foundation. On leave from the College of Law, he practiced law in Phoenix from 1987-1992 with Molloy, Jones & Donahue, chiefly in the field of bankruptcy litigation. Professor Furnish has taught courses on Contracts, Secured Transactions and other Uniform Commercial Code topics, Creditor-Debtor, Bankruptcy, Mexican (Comparative) Law and NAFTA.

He enjoys an international reputation for his work in comparative law and International commercial and trade law, as well as U.S. commercial law.  Bilingual in Spanish, he has been invited to teach and speak in every country in South and Central America, and has served as Visiting Professor at the National Autonomous University of Mexico (UNAM) and the University of Sonora, Mexico (UNISON) and on two occasions at the Catholic University of Peru. Professor Furnish was elected a Supernumerary Member of the Mexican Academy of Private International and Comparative Law in 2003, one of only two U.S. jurists so honored to date.

In the U.S., Professor Furnish has visited at Michigan, Iowa, Illinois and Houston. He is a roster member of the United States Panel of Arbitrators for NAFTA Chapter 19 disputes.  As a Director of the National Law Center for Inter-American Free Trade (NLCIFT), he participated in drafting a Model Inter-American Law of Secured Transactions approved by the Organization of American States in 2002, and its correlative Model Regulations for a Secured Transactions Registry approved by the OAS in 2009. He continues to work with the NLCIFT on law reforms that should stimulate more vigorous use of credit, and the growth of commerce and employment to alleviate poverty throughout the Americas and beyond. Specifically, Professor Furnish has worked to reform secured transactions regimes in Mexico, El Salvador, Honduras and Tanzania since his retirement in 2004.