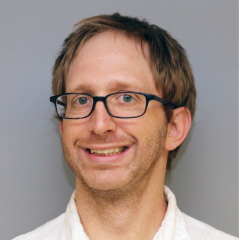 Michael Line is an extrasolar planetologist investigating the atmospheres of extra solar planets and brown dwarfs with the goal of understanding their composition, climates, and origins.

From the statistics of the Kepler space mission we have learned that nearly every star in the galaxy hosts a planet. That amounts to hundreds of billions of planets within our own galaxy! It is unlikely in the near future that we will send probes and landers to these planets that are many light years away, hence we are limited to studying these planets from afar from our own pale blue dot. We also know that many of these planets will host some type of atmosphere; hence an atmosphere (provided it exists) is the most readily observable portion of any planetary object. This means that, most of the information we can learn about the processes occurring on or within these far-way planets will come from observing their atmospheres.

I study a range of atmospheres from thick brown dwarf envelopes and highly irradiated close in exoplanets to the tenuous lunar exosphere. Determining fundamental atmospheric properties over a wide range of conditions is a necessary first step towards developing a comprehensive theory of atmospheres, their evolution, and their interactions with their surface, interior, local space environment, and any potential interaction biologic processes may have with them. Below I describe my approaches towards understanding distant planetary and brown dwarf atmospheres and what we can learn from them.

Transmission and emission spectra of an exoplanet can tell us about the composition and temperature structure of its atmosphere. Determining these properties is the key to understanding the atmospheric dynamics and chemical processes occurring in their atmospheres as well as their formation histories. Most of what we have learned about exoplanet atmospheres comes from large Jupiter and Neptune-like planets orbiting really close to their stars (<~0.5 AU) because they are the most readily observable given current telescope capabilities. Interpreting exoplanet atmosphere observations is tremendously difficult due to the comparatively low spectral coverage and signal to noise. Again, these planets are far away, unlike planets within our own solar system. To address this challenge, I have developed a wide range of Bayesian atmospheric retrieval tools, commonly used to interpret Earth and solar system spectral data, to extract the maximum amount of information about the abundances and thermal structures of exoplanet atmospheres with minimal prior assumptions. These tools have enabled the following investigations into the atmospheres of extrasolar planets.

One key aspect of these atmospheres is their one-dimensional thermal structure.  Do their temperatures increase or decrease with altitude?  All planets within our solar system with substantial atmospheres have a thermal structure that first decreases with altitude (the troposphere) to a point and then increases with altitude (the stratosphere).  This sudden increase in temperature with altitude is known as a thermal inversion.  Inversions typically occur because of the presence of some high altitude absorber, like ozone in Earth's atmosphere.  Under standard assumptions, the most likely candidate absorbers in exoplanet atmospheres are gaseous titanium/vanadium oxide (for the hottest Jupiter-like planets) or strongly absorbing soots and hazes (in cooler objects). However, so far, we have found little evidence for thermal inversions in planets for which our standard chemical assumptions suggest they should exist.

Another important component of an atmosphere is the efficiency of energy transport from the dayside to the nightside. How efficient is this circulation? How does it vary with planetary temperature? A useful method for understanding circulation efficiency and addressing these questions is by observing the thermal emission of a planet as it orbits the star. This allows us to observe different planetary longitudes. These are called phase curves.  Typically a phase curve is measured at one or two different wavelengths. My collaborators and I were able to determine the phase variations at many wavelengths, known as a spectroscopic phase curve. From the spectroscopic phase curve we were able to back out the 3-dimensional thermal structure of a hot Jupiter and show that the heat transport on this planet is remarkably inefficient.

Determining the elemental abundances of a planetary atmosphere can potentially tell us where it formed within the proto-planetary disk.  Two key bulk properties of an atmosphere that can inform us of a planets formation history are its metallicity and carbon-to-oxygen ratio.  In our own solar system, among the gas giants, we find that the atmospheric metallicities increase with decreasing mass.  How does the atmospheric metallicity of a exoplanets vary with its mass?  Using high precision observations with the Hubble Space Telescope we were able to precisely measure the abundance of water in a massive hot Jupiter and found that its metallicity indeed fit the trend of decreasing metallicity with increasing mass.

The carbon-to-oxygen ratio in an atmosphere can tell us the formation location with in the proto-planetary disk.  Planets who's atmospheres appear to be enriched in carbon relative to oxygen are presumed to have formed far out in the proto-planetary disk where water vapor freezes out into water ice.   This starves the nebular gas and subsequent planetary atmosphere of oxygen bearing molecules.  The dayside emission spectrum of one hot Jupiter shows strong evidence for oxygen depletion. However, in a recent study, we strongly detect water in this same planet's transmission spectra which definitively demonstrates that this planet is rich in oxygen.

Current exoplanet atmosphere observations are made with instruments simply not designed to do so.  Despite that we have made tremendous progress in our understanding. However, if we are to move forward we need dedicated instrumentation to observe the atmospheres of many planets in detail.   With collaborators at JPL I have been heavily involved in the science implementation of an explorer-class exoplanet atmosphere surveyor telescope. Such a telescope would be able to observe the atmospheres of hundreds to thousands of nearby extrasolar planets.  With those numbers we can revolutionize our knowledge of exoplanet atmospheres very much how the Kepler mission has revolutionized our knowledge of exoplanet demographics.

Additionally, the James Webb Space Telescope (JWST) will soon be launched. It is hoped that JWST will observe the atmospheres of ~150 or so planets in detail. The data will be unparalleled for some time to come. I am currently working with instrument specialists at NASA Ames to determine what the JWST will be able to tell us about the nature of exoplanet atmospheres.

Hot extrasolar planets are host to a wide range of different chemistries, from thermo-equilibrium chemistry in the deep atmosphere, to chemical kinetics in the mid atmosphere, to photo- and ion-chemistry in the upper atmosphere. The latter three are considered "dis-equilibrium" as they perturb the atmosphere away from the minimum Gibbs free energy state. Through chemical kinetics modelingwe can explore the interplay between these different chemistries and the effects that they have on the composition, and hence the observational consequences. Using these tools I was able to explore the effects of photochemistry and chemical kinetics on two extrasolar planets, the hot Jupiter, HD189733b and the warm Neptune GJ436b. Using a simple analytic relation to describe equilibrium chemistry I also devised a clever scheme to identify chemical dis-equilibrium in planetary atmospheres by measuring the abundances of a few key molecules.

Brown dwarfs straddle the boundary between planets and stars. They are not yet massive enough to fuse hydrogen like stars, but are too massive to be considered planets. They complete the OBAFGKM stellar sequence with three cooler classes, the L, T, and Y. They also straddle a line in terms of their formation. Do low mass brown dwarfs form in protoplanetary disks like planets or do they form via gravitational collapse in giant molecular clouds like stars? Brown dwarf data is extremely information rich due to their high signal to noise, spectral resolution, and wavelength coverage. Furthermore they encompass a diverse range in gravity, temperatures, and birth environments. This sets us up for the opportunity to investigate atmospheric processes over a wide range of properties.

The current approaches to interpreting these spectra are the so called "grid-model" approaches which make numerous assumptions about the nature of the atmosphere and seek to constrain only a few bulk parameters. For instance they often assume that the atmospheric thermal structure is in radiative convective equilibrium, the composition is in thermochemical equilibrium, and that the bulk elemental composition is at or near solar. Using the Bayesian atmospheric retrieval methods I developed for exoplanets, I seek to test these assumptions in order to identify new or missing atmospheric physics that don't fit the usual assumptions. These techniques are a paradigm in interpreting brown dwarf spectra. Some questions we may want to address are: What are the thermal structures of brown dwarfs? Are they in radiative convective equilibrium or are there other processesat play? What are the molecular abundances in brown dwarf atmospheres and how precisely can we measure them? Are the constant with what we would expect from solar elemental abundances in thermochemical equilibrium? What are the vertical distributions of these gases? Can we identify disequilibrium chemistry and how it evolves with temperature or gravity? What are their cloud properties? Are they uniform or are they patchy? How do they vary in time?

Using these retrieval methods we explored two well studied T-dwarfs both of which orbit a host star. These are known as "benchmark" systems. Why? If we can assume that the companion brown dwarfs and host star formed in the same molecular cloud, then we can assume that the brown dwarfs have the same ages and elemental compositions of the star. This allows an opportunity to validate our retrieval methods. What did we find? Through a stellar abundance analysis of the host stars and our retrieval analysis on the companion brown dwarfs we found impeccable agreement between the host star and brown dwarf properties. Along the way we found strong evidence form ammonia absorption in the near infrared. Something we did not expect to find until the Y-dwarfs. We also were able to demonstrate that these objects are cloud free, or at least any clouds have minimal impact on their spectra.