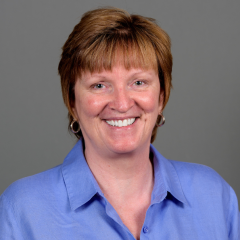 Krista Ratcliffe is a Foundation Professor and Chair in the Department of English at Arizona State University. She earned her doctorate from The Ohio State University (1988) and has been a professor and chair of English at Marquette University and Purdue University. Her research focuses on intersections of rhetoric, feminist theory, and critical race studies. Her books include: "Anglo-American Challenges to the Rhetorical Traditions: Virginia Woolf, Mary Daly, and Adrienne Rich" (1996); "Who's Having This Baby?" (2002); "Rhetorical Listening: Identification, Gender, Whiteness" (2006), which won the 2006 JAC Gary Olson Award, the 2007 CCCC Outstanding Book Award, and the 2007 Rhetoric Society of America Book Award; Performing Feminist Administration in Rhetoric and Composition Studies"(2010) co-edited with Rebecca Rickly; Silence and Listening as Rhetorical Arts (2011) co-edited with Cheryl Glenn; "Rhetorics of Whiteness: Postracial Hauntings in Popular Culture, Social Media, and Education" (2017) co-edited with Tammy Kennedy and Joyce Middleton, which won a 2018 CCCC Outstanding Book Award; and "Rhetorical Listening in Action: A Concept-Tactic Approach" (2022) coauthored with Kyle Jensen. Her work has also appeared in edited collections as well as in academic journals, such as CCC, JAC, Rhetoric Review, College English, and Rhetoric Society Quarterly. Her national service has included serving as president of the Coalition of Women Scholars in the History of Rhetoric and Composition (CWSHRC) and the Rhetoric Society of America (RSA). She is also a Fellow of the Rhetoric Society of America.