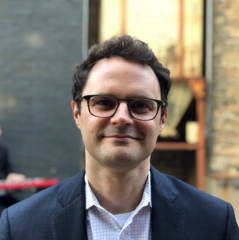 Professor Weinstein-Tull studies structural constitutional law, state and local governments, and election law. His scholarship reconstructs foundational public law theories to better account for the on-the-ground complexities of governmental institutions and day-to-day human experiences of the law. In the context of federalism, Weinstein-Tull has written about the ways that state and local governments can both frustrate and strengthen federal power, including federal civil rights laws and the right to vote. He has similarly studied some of our smallest local courts, including traffic courts, to better understand how we actually experience the administration of justice in our daily lives. Weinstein-Tull has published articles in the Columbia Law Review, the Chicago Law Review, the NYU Law Review, the Virginia Law Review, the Michigan Law Review, and others. In 2019, he was appointed to the board of the Judicial College of Arizona by the Chief Justice of the Arizona Supreme Court.

Before joining ASU, Weinstein-Tull was a Thomas C. Grey Fellow and Lecturer in Law at Stanford Law School. He previously worked as a trial attorney in the Civil Rights Division of the Department of Justice, where he litigated voting rights cases against states and local governments and was part of the team that defended the constitutionality of Section 5 of the Voting Rights Act in Shelby County v. Holder. He was a litigation associate in the San Francisco office of Munger, Tolles & Olson, and served as a law clerk to the Honorable Sidney Thomas of the United States Court of Appeals for the Ninth Circuit. He graduated from Yale Law School and the Harvard Kennedy School and earned his undergraduate degree from Stanford University.

The Experience of Structure (work-in-progress)