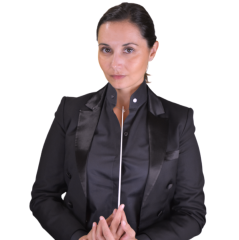 Julie Desbordes is the Music Director of the Philharmonia Orchestra at Arizona State University, where she also teaches conducting as Faculty Associate since the 2019–20 academic year.

Ms. Desbordes made her conducting debut at age 17 with l’Harmonie Municipale de Limoges, France. Since then, she has led diverse groups, from professional orchestras to community bands to youth ensembles.

Previously based in New York and Baltimore, she was the Artistic Director of two groundbreaking orchestras in New York City: the Queer Urban Orchestra (QUO) and the Turtle Bay Youth Orchestra. With those ensembles, she directed community- oriented performances and presented innovative programs of traditional and new repertoire that attracted large, enthusiastic audiences. Prior to those appointments, she garnered praise for her work conducting other New York ensembles, among them, the Chelsea and Litha Symphonies.

Also a leader in the El Sistema movement, she was a featured cast member in the documentary film,Crescendo! The Power of Music, directed by Jamie Bernstein (daughter of Leonard Bernstein), and is a frequent guest conductor at El Sistema programs internationally. In New York, she has taught and conducted hundreds of young musicians participating in El Sistema initiatives such as the Harmony Program and the Corona Youth Music Project.

As both a conductor and an educator, Ms. Desbordes has years of experience developing new audiences for classical music and making great music available to people of all ages and backgrounds. Beyond New York, in Taiwan each summer, she draws multi-generational audiences to her concerts as guest sconductor of the Tainan Kaoshung Orchestra Festival.

Ms. Desbordes holds Master and Bachelor degrees in conducting and trumpet performance from conservatoires in France and Canada. In 2022, she will receive the Doctor of Musical Arts degree in orchestral conducting from the Peabody Conservatory of The Johns Hopkins University in Baltimore. Her conducting mentors have included Raffi Armenian, Gustav Meier and Marin Alsop.

Learn more about Julie Desbordes and hear recordings of her performances at www.JulieDesbordes.com.