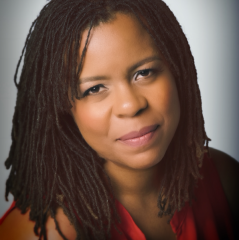 Rachel Finley’s work includes spoken word poetry, stage, film and performance art.  Her most recent one-woman performance piece, American Bullet, funded in part and developed in collaboration with GableStage is set to be released on September 4, 2020 on their digital platforms as part of the Engage@Gablestage program.  Professor Finley’s most recent stage appearance was as Lena in Mad Cow Theatre’s production of Boseman and Lena.  Since the start of the pandemic, Rachel has remained active, performing in several online “staged” readings, including Play Development Project’s Touch the Moon, by Arianna Rose (appearing as Becca), and Mad Cow Theatre’s Science Play Festival by several playwrights (appearing as The Griot and Jen) among others.  She is currently awaiting continued filming of her lead role in the pilot of Motherless, a dramatic series and the short film The Sweetest Girl for which she serves as both the casting director and intimacy director.  Rachel is a founding board member of Intimacy Coordinators and Directors of Color an organization whose focus is on promoting culturally and racially aware safe intimacy coordination practices in the professional entertainment industry.  Rachel Finley's professional directing career began in 2006 with Alliance Theatre Lab's production of Lee Blessing's Down the Road. Since then, she has directed numerous productions both on stage and on camera including her most recent productions, Venus by Susan Lori Parks at The African Heritage Cultural Arts Center, For Colored Girls Who've Considered Suicide When the Rainbow is Enough by Ntozake Shange  at The Pompano Beach Cultural Arts Center and the pilot episode of The Jaxons, a family friendly sitcom produced by Pinnacle Productions.  Since the pandemic, Rachel has also directed Judge Mablean Said, by Darius Daughtry via Zoom for New City Players.  As a founding member of the poetry performance troupe, Chaos Theory, Rachel co-wrote Unbroken, the group’s full-length performance piece which premiered at Mainstage Playhouse in 2016. She was Florida’s first State Poetry Slam Champion and has ranked in the top 2 at the Southern Fried Poetry Slam and top 15 at the Individual World Poetry Slam.  She has also served as a screenwriter on several projects for 1310 Bandits and Pinnacle Productions.  Rachel made her first inroads into the world of dialect coaching in 2018 with Theatre Lab’s staged reading of Andrea Stolowitz’s The Berlin Diaries.  Most recently, it was her great honor to serve as the dialect coach for Gritty City Repertory Youth Theatre’s Zoom Reading of Gloria Majule’s Culture Shock.  Professor Finley has taught Acting, Voice, Speech, and Theatre Appreciation at University of Miami, Florida Atlantic University, Lynn University, Broward College and The Broward Center for the Performing Arts.