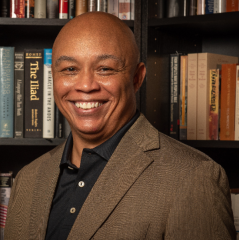 Dr. Isaiah (Ike) Wilson III, PhD is the Director of the U.S. Army War College (USAWC) Strategic Studies Institute (SSI) and USAWC Press.  He is a master strategist and a leading advocate for change in America’s concepts of and approaches to security and defense policy, and affairs of war and peace. A decorated combat veteran, former army aviator, and strategist, he most recently served as Director (Chief), Commander’s Initiatives Group, for the Commander, U.S. Central Command. A full professor of political science, Dr. Wilson formerly served as a professor and academic program director at West Point, where he also founded the West Point Grand Strategy Program. He has also taught extensively at the undergraduate and graduate levels at a number of prestigious colleges and universities, including Columbia University, Yale University, George Washington University, and the National War College. Dr. Wilson has numerous publications to his credit, including, Thinking Beyond War: Civil-Military Relations and Why America Fails to Win the Peace. Dr. Wilson is a life member of the Council on Foreign Relations and an International Affairs Fellow with New America.  He also serves as a senior lecturer of global affairs at Yale University’s Jackson School for Global Affairs.