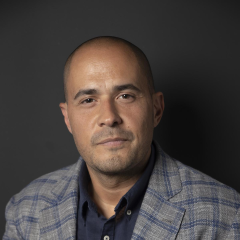 Umberto Celano is an associate professor with Ira A. Fulton Schools of Engineering at Arizona State University. His research agenda focuses on nanoelectronics at the interface of condensed matter physics, materials analysis, and semiconductor technology. His group is currently engaged in studying fundamental processes underlying the operation of emerging devices, with emphasis on design and use of nanoscale analytical instruments for device reliability, failure analysis, and correlative metrology. As such, his work is inherently multidisciplinary in nature blending device physics and reliability, with materials science and metrology.

Previously, Umberto received his Ph.D. working with Prof. Wilfried Vandervorst at the University of Leuven - KU Leuven and imec (Belgium). Here, he got interested in materials analysis and semiconductor metrology with emphasis on scanning probe microscopies, working to establish a novel three-dimensional nanoscale imaging technique to study materials in confined volumes (this work got him the 2013 IEDM Roger Haken Award). Later, he joined imec as a permanent researcher, contributing in various roles to the development and characterization of materials for advanced CMOS (logic and memory). In 2018, he was a visiting scientist with the Geballe Laboratory for Advanced Materials at Stanford University where he expanded his research interest to two-dimensional (2D) materials and nanophotonic. In 2019, he returned at imec as a principal member of technical staff and joined the faculty of science and technology at the University of Twente (Netherlands) as a part-time assistant professor.

The group’s research interest lies at the interface of surface/volumetric analysis for semiconductor materials, nanoscale characterization of nanoelectronics devices, and the design of analytical instruments. Our vision is to develop methods, and design experiments that generate fundamental understanding between device physics, nanoscale physical and chemical phenomena with relevant materials properties. The primary research goal is to enable a rich suite of techniques for the quantitative extraction of electrical properties of materials used in emerging nanoelectronics. We take a holistic approach correlating input from multiple metrology methods for nanomaterials while working to push the constraints imposed by the physics of the data generation and sensing with machine learning and artificial intelligence. This often involves the development of novel methods, integration of signal treatment and data acquisition process that can be used to optimize new device functions, understand failures, and accelerate the learning cycle in chip manufacturing environments.