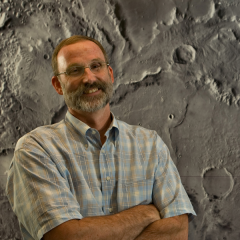 Philip R. Christensen is a Regents Professor and the Ed and Helen Korrick Professor in the School of Earth and Space Exploration at Arizona State University. As a geologist and geophysicist, his research interests focus on the composition, processes, and physical properties of Mars, the Earth, and other planetary surfaces. He uses spectroscopy, radiometry, field observations, and numerical modeling to study the geology and history of planets and moons. Over the past decade he has studied urban environments and growth worldwide using satellite data.

Professor Christensen was awarded NASA’s Exceptional Scientific Achievement Medal in 2003 for his work on infrared observations of Mars, NASA’s Public Service Medal in 2005, and the G.K. Gilbert Award of the Geological Society of America in 2008. He is a Fellow of the American Geophysical Union.

Christensen's research interests focus on the composition, physical properties and processes, and morphology of planetary surfaces, using spectroscopy, radiometry, laboratory spectroscopic measurements, field observations, and numerical modeling.  Much of his work has involved studying Mars, but his interests include the Moon, the outer planet satellites, and the Earth. Since the mid-1990’s he has pursued the use of spacecraft observations to study environmental and urban development problems on Earth.